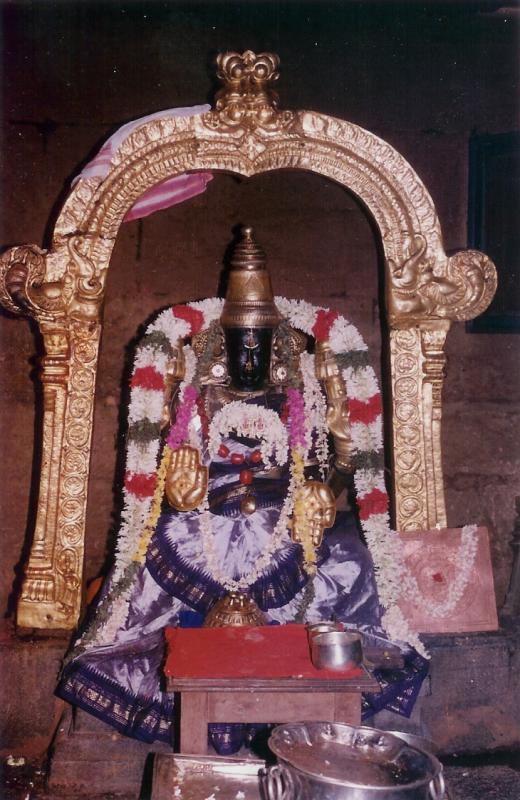 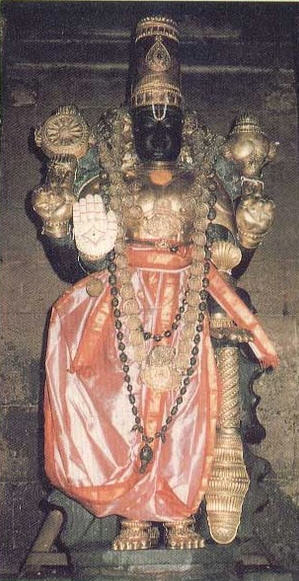 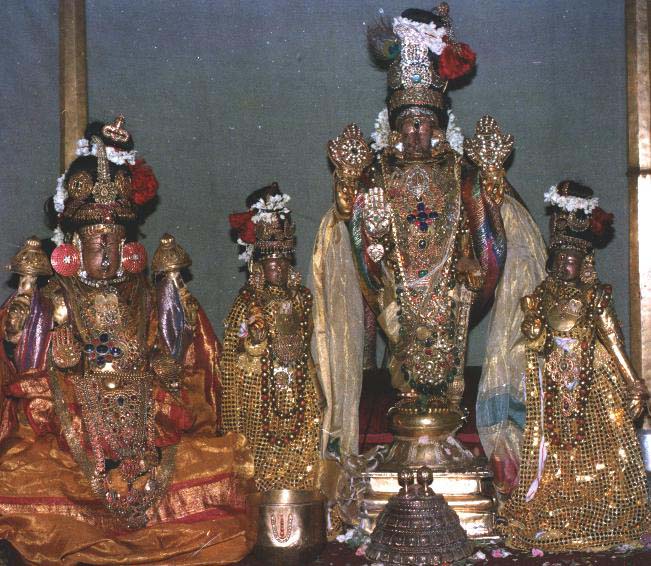 Garuda seva is very important in Kancheepuram. The world famous Garuda Seva is celebrated in Kancheepuram at Sri Varadaraaja Swamy Temple during Brahmotsavam in The Vaikasi Vishaka festival in the Vaikasi month (May 15th to June 14th aprox). Lakhs of people throng the Temple. On that day Lord Varadaraja who leaves the temple on Garuda Vahana (Mount) at 4 ‘o clock in the early morning returns to the temple at noon after giving darshan to devotees. In every Garuda seva in the Vaikasi Brahmotsavam, at least one interesting incident takes place. Swami Doddayacharya lived in Cholasimhapuram [Sholingur]. He would never miss the Garuda seva in Kanchi. He lived in the 16th Century. Once he could not go to Kanchi as he fell ill. On the Garuda seva day, he was in Sholingur and imagined how the festival at Kanchi would have been celebrated. When the Lord came out of the West Gopuram, mounted on Garuda, He noticed the absence of Swami Doddayacharya among the countless devotees, and decided to bless the devotee, who was yearning at Sholingur. Therefore, the Lord along with Garuda, disappeared for a couple of minutes from Kanchi, and graced Swami Doddayacharya. This incident is remembered even today as Swami Doddayacharya seva, when the Lord is hidden from our view by lowering the umbrellas for a couple of minutes. This shows the care the Lord has for His devotees. The Lord has countless ornaments. As an example, even the Crowns, the Lord Sri Varadaraja adores are plenty. Weapons are many. Swami Thiruvarangathu Amudhanar says in his Ramanuja nootrandadi, that the Lord's Divine weapons took the incarnations of the brothers of Sri Rama.
View videos of the Kanchi Garuda Seva here:
http://www.youtube.com/watch?v=3qSorKFUcBw&NR=1
http://www.youtube.com/watch?v=LsEKSDciS5I
http://www.youtube.com/watch?v=qyaCVdp0ZCk

There are 13 video clips in you tube and one web photo album in picasa containing the utsavams of kanchi 2009. The weblinks are reproduced below:
Kanchipuram Sri Varadaraja Swamy is supposed to represent the Dwaya Manthra

Sri
We will start with the word Sri. Sri has six meanings:
SRIMAN NARAYANA CHARANAU SARANAM PRAPADYE
Here, two ways of interpretation are possible.
Both meanings are equally valid. Although it says only the feet, what it means is the divine, auspicious form of the Lord. As you know, the feet are the most important of the Lord's form. We only fall at the feet of the Lord, for obtaining salvation. Hence the feet are mentioned particularly in this context.

The first part means, seeking refuge at the divine feet of Sriman Narayana. So, the first part indicates the upaya or means of attaining salvation.
The second part denotes the fruit to be achieved, namely, service to the Lord.

SRIMATE NARAYANAYA NAMAHA
The second part of the Dvaya Mantra reads as follows: "Srimate Narayanaya Namaha". This has two different meanings.
The above are the two meanings of the second part.