“Arjun, you grieve over those who should not be grieved for and yet speak like the learned; wise men do not sorrow over the dead or the living” 2:11 (http://www.bhagavad-gita.org/Gita/verse-02-11.html)


In fact there was NEVER a time when I was NOT or when you or these kings were NOT. Nor is it a fact that hereafter we shall all cease to be. 2:12
(http://www.bhagavad-gita.org/Gita/verse-02-12.html)


There are three significant philosophies –

They are:
The differences between Advaita and Visishta-Advaita

Advaita says there is no difference between anything. It claims no bedam. It says everything is Brahmam, and anything that you see or experience with your Indriyams is Mayawada or Illusions. This is in total contrast to Visishta-Advaitam which says everything you see is real, but there is One Brahmam which contains a bunch of Jeevatmas (Chits) and Material Bodies (Achits) that are part of the same Brahmam. When a person enjoys the beauty/fragrance of a flower, the physical Indriya is the thing (Achit) that is enjoyed by the enjoyer who is the Jeevathma (Chit) uses to perform it with the Catalyst as the Ishwara (Paramatma). 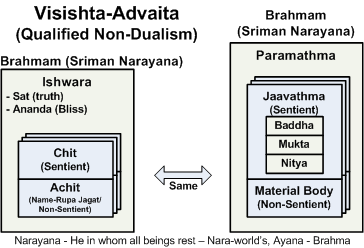